Atheism shall set you free

People who hold a belief in God often ask me why I would subscribe to such a depressing Worldview as Atheism or specifically Naturalism. I suspect that this entry  will be similar to previous entries, where I explained why I not only do not believe in gods but why it’s also a good thing, that  there is no evidence for them (as far as I’m aware).

Still, I want to summarize why I as an Atheist don’t want deities to exist. My first reason is of course, that if God exists (or all meaningful definitions of him), then we would be forced to follow his rules or fear certain consequences. Those consequences are of course punishments in this life like tragedies etc. being born in another life in a low social status ,like the Hindus believe or punishment in form of an afterlife.

Why would I want to be in ownership of anybody? Theism entails, that God owns us and while we wouldn’t have to adhere to him (and I hope I wouldn’t) God does come with consequences, which I don’t desire and which I think no one should desire.

Now there are of course certain consequences, which theists would assert are desirable. If we adhere to this being and follow his rules, then we will spend an eternity of bliss alongside him in heaven.

I have 3 reasons against Heaven being good and one caveat but ultimately I find my 3 reasons convincing to me at least.

First the Caveat: My relatives. Some of my relatives are already dead, mainly one of my grandmothers as well as and most importantly my mother. It’s a complicated story, which I don’t want to talk about on this post but under my belief system I’ll never see her again. I would give a whole lot, just to talk to her one more time. It makes me sad, that I won’t have that opportunity anymore.

Now for my reasons:

My first reason is, that it would make me sick to my stomach, to spend eternity alongside a deity, who sends others for eternity to hell. He could of course (as some Christians suggested to me he would) manipulate my mind in such a way, that I wouldn’t know, that people were in hell. In that case, the person that is in Heaven could no longer be my true self.

But hey there’s a really simple way out of this one: Maybe hell doesn’t exist in the first place. There are theists who reject hell. Wouldn’t that mean that God is a good God as he rewards everybody? The theist would think so, but Heaven to me sounds utterly terrible. I don’t know where I found this quote or who it could be attributed to but I find it fitting: 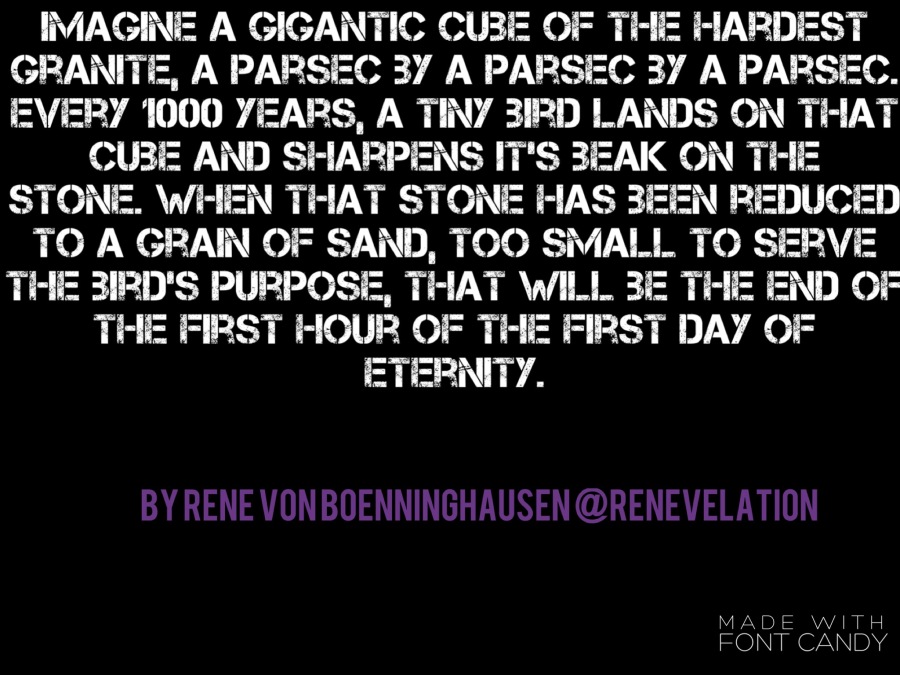 Does this sound like a Paradise to you? Eternity is not only a long time to be wrong it’s a long time period.  Way too long for me.

The third and most important point: What purpose does this life serve? Why would I try to accomplish anything? Why would I go to University? If merely believing in a deity and worshipping it gets me everything I want or need, why waste my time trying to accomplish anything? I’m just as fine of, sitting at home all day, getting food paid from my state and watching TV. The accomplishments however little they are to an Almighty, are meaningful to me because they are mine. They make me proud and give me purpose. But in the end if theism is true, it was all for nothing as sitting in my home and praying would at the very least have the same, if not a better result, then trying to be successful.

Atheism gets rid of all that baggage and while death is frightening, to me at least it’s better than the alternative that is eternal life. Atheism has set me free.

Goodbye from yours truly,

One thought on “Atheism shall set you free”